Video: First Person in US to try the HAL Suit (see below)

More feedback back on The Community is Walkable, Are You? prompted this look at Exoskeletons in general and the ‘HAL Robot Suit’ specifically. 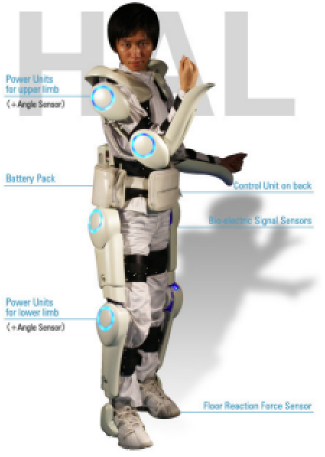 HAL is the “Hybrid Assistive Limb” and, what makes HAL special is that is a “voluntary control system” as well as a “robotic autonomous control system.” And why is that special you ask?

When a person tries to move, nerve signals are sent from the brain to the muscles by a motoneuron which results in movement. The surface of the skin gives off faint biosignals. HAL can pick up on these signals via a sensor attached to the skin and then can move the joint at the same time as the muscle movement. HAL gets the wearer’s intention. This is the voluntary control system.

Now, when you add in the ‘autonomous control system’ you have human-like movement. HAL has a database of small movements (which is continuously updated from the suit wearer) and puts these movements together to coordinate a smooth motion with the power units.

More than a decade in the works HAL is a product of the Japanese company Cyberdyne. Patient trials are underway in Japan and they rent the device to hospitals & clinics for about $1,500 per month.

Too Close For Comfort

Universal Design Principles Applied To Technology In The AIP Home