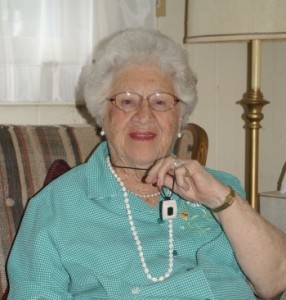 David Church, who is a purchaser for the Wilkes Regional Medical Center (WRMC), and who works part time for the Auxiliary installing and servicing the 400- plus Lifelines throughout Wilkes County, has a compelling testimony about how a Lifeline can save a life-his own, in fact!

Around 5:30 p.m. on Aug. 14, Church was mowing his yard at his home in the Rock Creek community, on Rock Creek Church Road, when he was stung just above his ear by a wasp. His head and face immediately began to swell, and his breathing became quite difficult. He attempted to call a neighbor, but no one was at home.

Church knew he needed immediate medical attention, but he thought he could drive himself to the hospital. However, the swelling rapidly increased and his vision began to blur, and he realized he could not make it. He pulled into the driveway of the home of Ola Brewer on Rock Creek Road. He knew that she had a Lifeline alert system since he had installed one at her home five years ago. Also, Mrs. Brewer was his great-aunt.

Church was able to get to her front door and ring her door bell. When she came to the door, all he could say was “Push your Lifeline.” He then passed out, and did not remember anything until he was in the ambulance.

Wilkes EMS personnel quickly responded to her home and revived Church and rushed him to the emergency room of WRMC where he received additional medical attention. Since his breathing had almost stopped by the time EMS personnel reached him, he was kept in the intensive care unit for two days of observation. They later told Church that he might have died had the alarm not been turned in when it was.

Church is now fully recovered and back at work installing and servicing Lifelines throughout the county. He now has an added incentive to use when telling people the value of having a Lifeline.

“I was glad I was able to save his life,” said Mrs. Brewer, who is being called a hero by her family and friends. “I was really scared to death. I just barely heard him knock, and I didn’t know who he was.”

“I do everything involved with the Lifeline program, but I never thought I’d have to use it,” said Church. “This is a service I provide for others, but I surely would have died without it.”

Church said he was unable to call from his cell phone while en route due to the severity of the reaction. But, by alerting authorities through Lifeline, the EMS was immediately given precise instructions to the home.

“Mrs. Brewer is certainly my hero,” said Church. “I just barely made it to the porch to knock on the door before passing out. But when I heard the Lifeline alert go off, I knew things would be okay.”

The WRMC Auxiliary has operated a Lifeline program since 1985. Until last year the program was monitored and calls answered by auxiliary volunteers and by the EMS.

Last year the auxiliary entered into a contract with Phillips Lifeline Company located in Massachusetts to monitor all calls and direct appropriate emergency assistance. When a Lifeline client presses the alert button, which is worn as a necklace or as a bracelet, someone immediately responds and finds out what type of assistance the person needs.

Each Lifeline client has at least three contact people who can be contacted by the Lifeline monitor. If an ambulance is needed, the Wilkes EMS is alerted and help is immediately sent to the person’s home.

Many of these calls do not require anything other than contacting a family member or a neighbor to go to the client’s home and assist him or her with some non-medical problem. The WRMC Auxiliary encourages all elderly citizens who live alone to wear a Lifeline when they are at home.

Is It Time To Throw Out Those TV Ears?

Successful aging — computers and the internet