Aiphone video intercom which shows images of the visitor throughout the house and records each visitor.

AIPatHome.com Tech Advisor Laurie Orlov attended the 2009 Consumer Electronic Show and identified 10 products as having an interesting appeal to the boomer and beyond market. 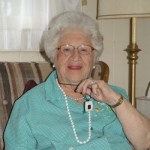 David Church, who is a purchaser for the Wilkes Regional Medical Center (WRMC), and who works part time for the Auxiliary installing and servicing the 400- plus Lifelines throughout Wilkes County, has a compelling testimony about how a Lifeline can save a life-his own, in fact!

Around 5:30 p.m. on Aug. 14, Church was mowing his yard at his home in the Rock Creek community, on Rock Creek Church Road, when he was stung just above his ear by a wasp. His head and face immediately began to swell, and his breathing became quite difficult. He attempted to call a neighbor, but no one was at home.

Church knew he needed immediate medical attention, but he thought he could drive himself to the hospital. However, the swelling rapidly increased and his vision began to blur, and he realized he could not make it. He pulled into the driveway of the home of Ola Brewer on Rock Creek Road. He knew that she had a Lifeline alert system since he had installed one at her home five years ago. Also, Mrs. Brewer was his great-aunt.

Church was able to get to her front door and ring her door bell. When she came to the door, all he could say was “Push your Lifeline.” He then passed out, and did not remember anything until he was in the ambulance.